The Step-by-Step Guide to Your Django Rest API

In this Django REST framework tutorial, we’ll go through all the stages of building an API in great detail.

Set up Your Development Environment

First of all, you have to install Python dependencies for your OS. If you’re using Windows, you can easily install Linux as your secondary OS using this manual or VirtualBox.

If you’re using Mac OS or Linux, it should be easy to install:

Define the environment variable PYENV_ROOT to point to the path where pyenv repo is cloned. Then, add $PYENV_ROOT/bin to your $PATH for access to the pyenv command-line utility.

Add the pyenv unit to your shell to enable shims and autocompletion.

Restart your shell so the path changes take effect. Now, you can begin to use pyenv.

At this point, install the latest stable version of Python. Now this…

… and create an environment for your project.

Now, we’ll create a project folder and navigate to the newly-created directory.

The next step is to create a Django project. There are several ways to do it.

Personally, I prefer to start projects from a template and use the Django Stars backend skeleton that has been implemented in our company.

Here’s the command that will help you start a project from a template:

At the start, you will be offered several Python versions to work with. Select the 3.7 version of Python. 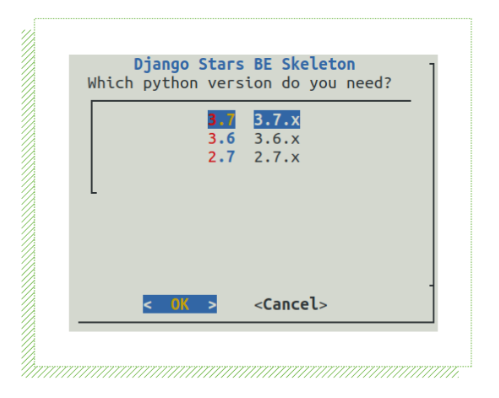 Set the project name to django_blog.

Since we’re going to use the Django Rest Framework, we should select the 3rd option: 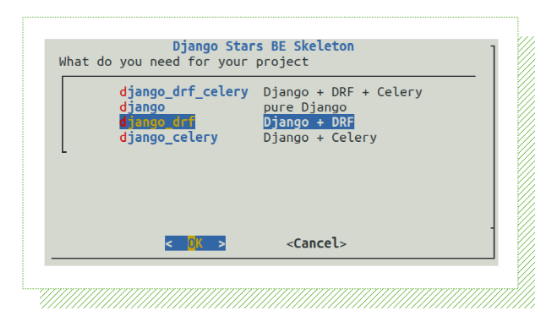 If you know you’ll need Celery for your project, you can also choose the first option and press OK.

Anyway, what we just did was create a project from a template. Let’s now navigate to the project name directory:

To run the project, we need to install some packages, which are defined in the requirements/dev.txt.
Thus, we install packages with requirements for local development.

Navigate to the API directory:

and install the dependencies.

If you need to add any other packages, just add your package to the dev.txt file for local development or to common.txt if you need it to be installed on the server.

Next, we will have to add the Pillow package that isn’t included by default in the package we installed. Open the
requirements/common.txt file and add Pillow==6.1.0 to the end. Then run:

This is the file that contains a list of all the packages that will be installed.

Our project needs a database. Most Django developers prefer to use PostgreSQL for all environments — i.e., the development, staging, and production systems. Some people use SQLite for local development and PostgreSQL in production. Django ORM allows you to deal with both databases. I strongly recommend that you keep your development station and production as similar as possible and use the same database.

There are several ways to bootstrap a database:

To make the database bootstrapping easier, we can use SQLite. It’s an in-process library that implements a self-contained, serverless, zero-configuration, transactional SQL database engine.

All you need to do is open the .env file and replace:

Here, we use the django-environ package, which allows you to define the configuration depending on your environment. You can find out more about this approach through The Twelve Factor App.

PostgreSQL is a powerful, open-source object-relational database system. It uses and extends the SQL language, and has many features that allow you to safely store and scale the most complicated data workloads. This system is a bit more complicated than SQLite, so you might want to learn more about it.

It’s much easier to install PostgreSQL with Docker — an open-source tool that automates the deployment of an application inside a software container. If you’re not familiar with Docker yet, feel free to check out some instructions on how to install it and work with docker-compose.

Then just open a new tab and run:

Next, we should apply initial migrations:

This will apply all previously unapplied migrations to the database which comes with the Django installation.

At this point, we’ve already created a Django project, installed packages with requirements, and bootstrapped the database. Which means we can now finally create a blog application using the following command:

By doing this, you’ve also created a new directory. It will be available in apps/blog.

Now, we should register our application in 'INSTALLED_APPS'.

Add ‘blog’ to your 'INSTALLED_APPS' settings placed in 'api/django_blog/settings/django.py'

As you may have already learned, test-driven development is an approach that focuses on writing tests before you start implementing the business logic of your application. Writing tests first requires you to really consider what do you want from the code. But apart from this, TDD has numerous other benefits:

Also, TDD tells you whether your last change (or refactoring) broke previously working code. Moreover, it forces radical simplification of the code – you will only write code in response to the requirements of the tests. Also, you’re forced to write small classes focused on one thing only. Further on, it allows the design to evolve and adapt to your changing understanding of the problem.

The resulting unit tests are simple and act as documentation for the code. Since TDD use cases are written as tests, other developers can view the tests as examples of how the code is supposed to work.

Before we write tests for our API, let’s take a step back and look at HTTP and how it interacts with the Django REST Framework.

The Hypertext Transfer Protocol (HTTP) is an application protocol for distributed, collaborative, hypermedia information systems. HTTP defines methods like GET, POST, PUT, DELETE, OPTIONS, and HEAD to indicate the desired action that should be performed on the resource you identify. These methods can be defined by the characteristics of safety and idempotency (you can find out more about this here). By agreement, REST APIs rely on these methods, so feel free to use the appropriate HTTP method for each type of action.

How to Write Tests

Open the 'api/django_blog/apps/blog/tests/test_models.py'file and add the following code:

Open the 'api/django_blog/apps/blog/models/post.py'file, and define models for Post and Tags:

Our Post model inherits from 'CoreModel', so fields and methods defined in 'CoreModel' can be added to the 'Post' model.

This means that the test was run successfully.

A serializer is a framework that allows complex data such as query sets and model instances to be converted to native Python data types. Then, these can then be easily rendered into JSON, XML or other content types. Serializers also work in the opposite direction – deserializing allows parsed data to be converted back into complex types after having validated the incoming data. The serializers in the REST framework work in a way similar to Django’s Form and ModelForm classes.

Add the URLs of your endpoints to

‘api/django_blog/apps/blog/rest_api/urls.py’. This will be the URL where your API will be available.

Now, you can test your API using the following command:

Voila! The test has been completed successfully.

API may stand for Application Programming Interface, but humans have to be able to read the APIs, too – someone has to do the programming, hence the browsable API. With the Django REST Framework, you can generate a human-friendly HTML output for each resource when an HTML format is requested. These pages allow you to easily browse through resources, as well as build in forms to submit data to the resources using POST, PUT, and DELETE.

Then, open your browser of choice and visit this url: 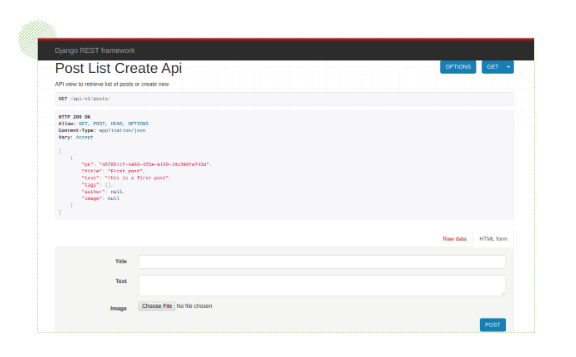 Create a new post with an image file. Fill out the fields “Title” and “Text”, choose an image file in the form at the bottom, and press “POST”. The page will reload with the new content. 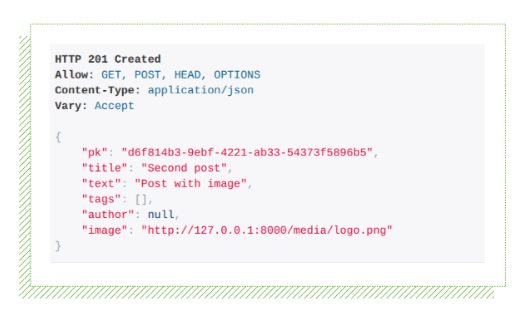 Versioning is a vital part of API design that allows you to improve the representation for the resources of your API and alter behavior between different clients. The REST framework provides a number of different versioning schemes. Versioning is determined by the incoming client request and may either be based on the request URL or the request headers.

In this example, we use the URL path versioning approach.

If the response was changed and you decide to define a different API version, you might handle it as follows:

The REST framework provides built-in support for generating OpenAPI schemas. These can be used with tools that allow you to build API documentation.

The browsable API that the REST framework provides allows your API to be entirely self- describing. You can get the documentation for each API endpoint by simply visiting the URL in your browser.

However, there’s also a number of great third-party documentation packages available. For instance, let’s try to integrate drf-yasg. Its goal is to implement as much of the OpenAPI specification as possible (nested schemas, named models, response bodies, enum/pattern/min/max validators, form parameters, etc.) and generate documents that can be used with code-generation tools.

Open the terminal, and type in:

Also, we should include URLs, for generated documentation:

You can find the documentation on your API in this document. 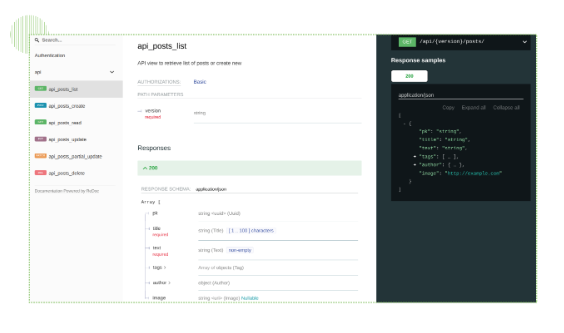 If you want to implement new features or play around, feel free to clone or fork my GitHub repo.

If you still have questions and want to learn more, there’s plenty of great Django REST API tutorials and resources for self-improvement. Here’s a reading list our software development team Django Stars highly recommends. And if by any chance you have to deal with nested objects, here’s a useful library that might come in handy. Also, feel free to visit the django_blog repository for ideas and inspiration. But as I said before, if you know your basics well, you can build upon this knowledge. And considering how universal APIs are, you’ll be able to work with any kind of product, which will make you an indispensable team member and a universal soldier of software development.

This guide was originally posted on Django Stars blog.